The Benefits of Using Moss In Landscaping

Mosses are small, flowerless plants that belong to the Musci class and Bryophyta division of plants. They can be found growing in shaded and damp areas, most commonly on rocks, tree bark, along water, in between decorative rocks or brick and on rooftops. In some cases, they can be found in deserts and the frozen tundra. Most species of moss grow to a maximum height of two inches or less, but a few will exceed four inches. The plants lack a traditional root system, instead using rhizoids to anchor themselves in position. Moss plants also lack seeds, instead using spore capsules for reproduction. While some consider moss a weed, others embrace it and actively work to include it in their landscaping endeavors. There are many benefits to using moss in landscaping projects.

Moss Is Beautiful When Planted In Gardens

The simple, elegant beauty of moss offers several benefits when used in a garden setting. Garden moss grows in a variety of vibrant shades of green, a color which has been shown to evoke feelings of serenity, hope, peace and safety. Moss is an evergreen type of ground cover, so even if it lies dormant, it will retain its green hue. However, dormant moss won't be as bright as live moss. Its timeless beauty is also used to add a feeling of age or stillness to a garden. 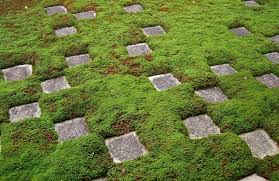 Moss Is an Excellent Choice For Shady Areas

Moss requires a substantial amount of moisture to thrive, so it is an excellent choice to plant in shady areas, where moisture is retained more readily than areas of full sun. It works well in areas where most other plants won't grow well because the ground is too damp, such as near water, under dense foliage and along hills or rocky cliffs. Moss can withstand partial sun, especially if exposed during the morning or evening, but it will not grow well in direct afternoon sun.

Swampy areas are especially good places to grow moss. Slow moving and stagnant water tends to become a breeding ground for mosquitoes. Moss absorbs the excess moisture the mosquitoes need to reproduce so the area becomes unappealing and the mosquitoes will vacate the area. Stagnant water can also harbor bacteria that can lead to other problems, such as fetid air or illness. Moss not only makes the area look cleaner, it will not smell bad or breed potential illness causing bacteria. Since moss grows at a rapid rate, these problems can be cleared up in a relatively short period of time. 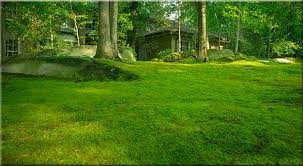 Mosses Are Easy To Plant and Grow

One of the main benefits of using moss in landscaping projects is the simplicity of planting and growing it. To plant most variety of moss, clear the area of debris then give the ground a simple scratching to loosen the dirt. Dampen the ground and lay the moss out. Flatten into place. Once the plants are in place, they should be soaked thoroughly and kept moist for two to three weeks to ensure they thrive in their new location. Once the garden moss is thriving, it requires no mowing, fertilizing, pesticides, watering or liming. If the moss is subjected to periods of high temperatures or low rainfall, it will fall dormant yet remain green. Once rain begins falling again, the plants will rebound within a matter of hours.

Overall Appearance of Moss Is Lush and Green

Live moss has an appearance that cannot be replicated by man or nature. In some climates, such as the Pacific Northwest, moss is used in place of grass to create a beautiful, velvety lawn. Even the most mundane piece of hardscaping can become lush and vibrant with moss growing on it. Whether used as ground cover in a large area of land, accents in a small flower bed or as a decorative piece, the inclusion of moss in landscaping projects brings a beautiful sense of peace and serenity.

You can purchase moss today at TN Nursery