Are you looking For A Wetland Plants Nursery? Look No Further, Tn Nursery has got you covered.

This Customer Was looking for a weeping willow to go in her wetland area. Here's a testimony of her product purchased from Tn Nursery.

I had developed a fascination with the weeping willow tree when I visited the Botanic Garden in Chicago over ten years ago. Now that I live here in Oklahoma, I decided to grow a weeping willow tree of my own. Thanks for leading me to your website, I did it correctly, and now my tree is growing great!

Salix babylonica, commonly called the Weeping Willow tree, is a medium to a large deciduous tree with a stout yet sturdy trunk topped by a graceful broad-rounded crown of branches that sweep down to the ground. An addition for large-scale gardens, the weeping willow grows up to around thirty to sixty feet and spreads up to about twenty to thirty-five feet of graceful arching branches. The leaves of these trees are slender and oval-shaped. They appear as mainly used as ornamental trees because of their beautiful pendulant components; however, these plants have various uses, especially in crafting instruments flutes.

The weeping willow tree is native to China and had a long history of trade along the silk road to Europe, and it has repopulated in North America. This tree is famous worldwide for its unusual weeping branches. Its scientific name, salix, derives from salicin, a chemical in the plant's leaves and bark metabolized into salicylic acid, providing temporary and otherwise short-term relief to headaches. In 1937, Felix Hoffman referred to the stories from ancient Assyrians, Sumer, Egyptians, and Native Americans—along with the works of the Reverend Edward Stone and Henri Leroux—to synthesize an altered version of salicin. Hoffman's new creation, otherwise known as acetylsalicylic acid, is what we now know as aspirin. So in a way, the weeping willow is to be credited for our headaches and migraines. 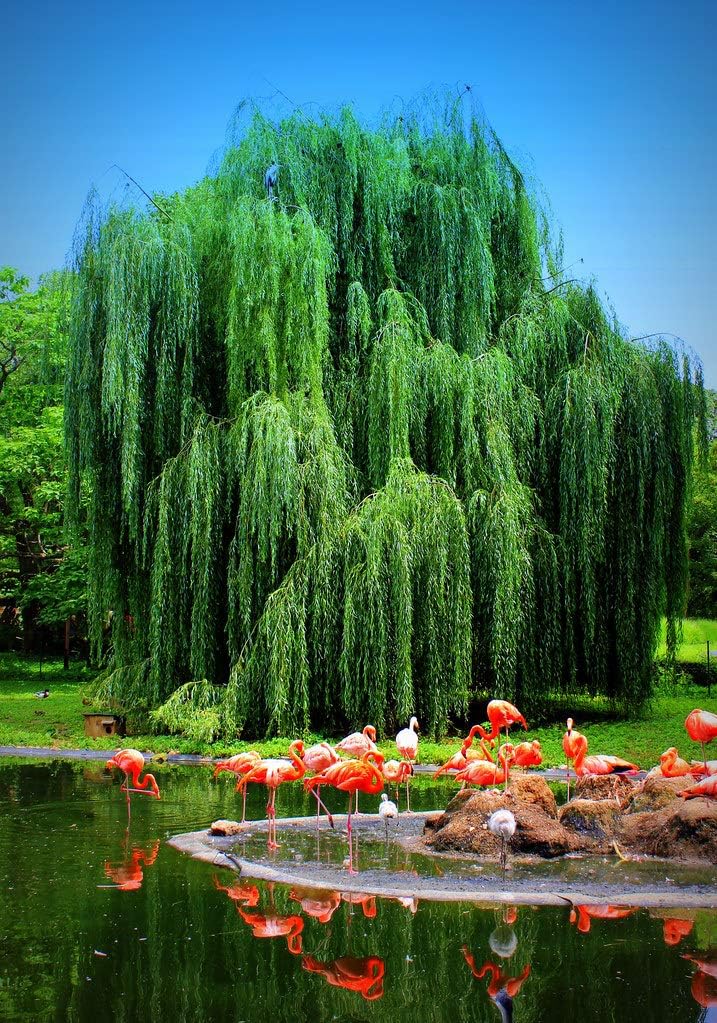 Weeping willow trees get their common name from how rain looks like tears when it's dripping off the curved branches. They are famous for their dramatic and elegant appearance. Weeping willow's long, graceful branches "weep" into an arch, somewhat creating a round canopy that touches the ground gently. The narrow leaves are light green on top, with silvery undersides until they turn yellow in autumn. The bark is rough, gray, and ridged, and the downward sweep of the willow's branches associates the plant itself with the more gentle and inward aspect of human emotion.

The willow tree is quite resilient; some varieties will even re-root from cut-off branches. Although they are best in full sun with access to plenty of water, the weeping willow will add gentle peace to the yard in which it roots itself. Between its many varieties, the willow can grow between two inches and sixty-five feet. Whether it is the grassy shrubs of the Dwarf Willow or the meditative boughs of the Weeping Willow, the Willow Tree varieties are sure to delight.

As willow trees serve as hosts for many insects, weeping willow care increases as they grow. Caterpillars and borers feed on their bark, and care for a weeping willow includes monitoring its branches and foliage, too. Keeping an eye on the tree is necessary due to the tendency of branches to crack and fail due to age, especially during cold weather and the winter season. In addition, the foliage of the weeping willow is prone to fungal diseases. As a result, it ends up with spots and therefore loses its attractive appearance, so insect and problems may require treatment to keep the tree's aesthetic appeal.

In raising and caring for a weeping willow, moist or wet soils are of utmost importance, and so is at least around half a day's sun. Willows are primarily from nearby rivers and streams, though, and one can read the presence of water in a landscape from a distance by noting a willow's population. While willows tolerate almost any soil, even coarse sand to fine silt loams at pH 6.5 to 7.5, they can be pretty sensitive to pollution. Propagation of willow can be just as easy as plucking a stem and placing it in a moist medium, upright like a miniature tree, as the willow carries a hormone from which the term "rooting hormone" derives. However, the willow tree roots may stray to or three times from their dripline area, and they may end up clogging septic systems and storm drains.

There are other kinds of willows beside the weeping willow, and each of them is just as impressive and elegant as the last, no matter the size or species. First, there is the white willow, a glorious tree with the silvery foliage that gives it its nickname, and it can grow up to seventy feet. The dappled willow may be the loveliest of the willow variations yet, its foliage exhibiting shades of white, green, and most of all pink. However, the vegetation changes color according to the season, so the pinkish hues would inevitably wash away to its default white and green colors. The branches, in turn, transform into a bold red shade to complement its foliage during the fall. This elegant shrub makes for a sure eye-catcher and a centerpiece, as a rich and gorgeous emphasis to the landscape. The coyote willow, scientifically known as the Salix exigua, is a species native to North America that the Great Basin Indians have used for many years. It has many uses, such as baskets, fish traps, ropes, bows and arrows, and cradleboards. This willow also serves as a medicinal plant, as they sometimes prepare it as tea and powdered bark to cure various ailments ranging from dandruff to dysentery. The dwarf willow, belonging to a subspecies of the Salicaceae family, is the oddity among the other willows as the tiniest of the willow species, hence the name. Widely distributed throughout the North Atlantic and eastern Canada, the dwarf willow is a low-growing shrub that only reaches up to two to five centimeters in height.

Willows are versatile in their use besides being ornamental plants, so they are considered a vital tree variety. From holding back soil to being a landscape centerpiece for your yard, willow trees are a force to be reckoned with--and a versatile one as well.