There’s an assortment of reasons why one would be interested in growing giant pumpkins. Perhaps you want some supersized jack-o’-lanterns, or you’re looking to engage in some competitive pumpkin paddling.

Pumpkins can also be heavyweight champions and rake in some cash if you go the professional grower route, states Tammy Sons of Tn Nursery in Tennessee. In any case, growing giant pumpkins is fun and comes with a certain sense of accomplishment. The world’s heaviest pumpkin weighs over 2,600 lbs, and while you may not be aiming to grow such a monster whopper, you can still cultivate your giant gourds with the following tips.

Choose Seeds With The Right Pedigree
Pumpkin seeds are not made equal, and if you want extra-sized fruit, then only the Atlantic Giant will do. In the late 1900s, Howard Dill spent over 30 years selectively breeding these big beauties from the Mammoth pumpkin varieties. According to studies, this selective breeding resulted in pumpkins with larger phloem, allowing for more sugar uptake to grow the fruit.
It isn’t easy to overstate the importance of superior genetics when growing giant pumpkins. Sure, large pumpkins also need plenty of resources like water and sunshine, but this will only take you so far unless you start with prime seeds.
Preparing the Ground
Pumpkins love being in the sun, so it’s essential to avoid shaded spots. Instead, choose an area that receives at least eight hours of full sunlight per day. After finding the sunniest place in your yard, you’ll need to create raised beds shaped like a hill or pitcher’s mound to improve soil drainage. Speaking of soils, ideally, the soil should be slightly acidic to moderately alkaline, say between pH 6.0 and 8.0.
Fortunately, you can always amend the soil composition to make up for nutrient deficiencies and excessive acidity by sourcing quality garden soil from your local nursery. Once the beds are sculpted, add cow manure to fertilize the soil and some grass or mulch to help conserve moisture.
You may also want to add a structure to shelter your pumpkins from high winds, heavy rain, frost, and other harsh elements. For instance, a floating row cover or shade cloth is necessary to protect transplanted seedlings until they’re well established.
Don’t forget to allocate enough growing space for each pumpkin. Depending on the pedigree of the seeds, you might need as much as 10-20 feet to accommodate not only the pumpkin but the spreading vines as well.
Planting Your Pumpkins
As mentioned, pumpkins are warm-season fruits. So if you’re seeding directly into the soil, the best time to plant pumpkins is well after the last frost date predicted for your area. Before planting, it’s best to soak the seeds overnight in warm water to speed up germination. During the planting process, sow the seeds in shallow holes, two at a time.
You then cover the seeds and keep the soil moist and warm until germination. Typically, germination takes up to seven days. Once the seedlings have two or three true leaves, pick your strongest fighter and weed out the weaker ones.
Sowing indoors is also possible if you want an early start. Usually, this is about two to four weeks before the frost passes. Make sure you’re using a well-balanced potting medium, so your seedlings get off to a healthy start. Planting the seedlings is as simple as laying them flat inside a shallow hole in the pot before covering them.
Be sure to keep the soil moist and warm by regularly using a spray bottle and making sure the pots are placed in a sunny location. When the first couple of true leaves emerge, it’s now time to transplant the most robust seedlings into the beds you created earlier. 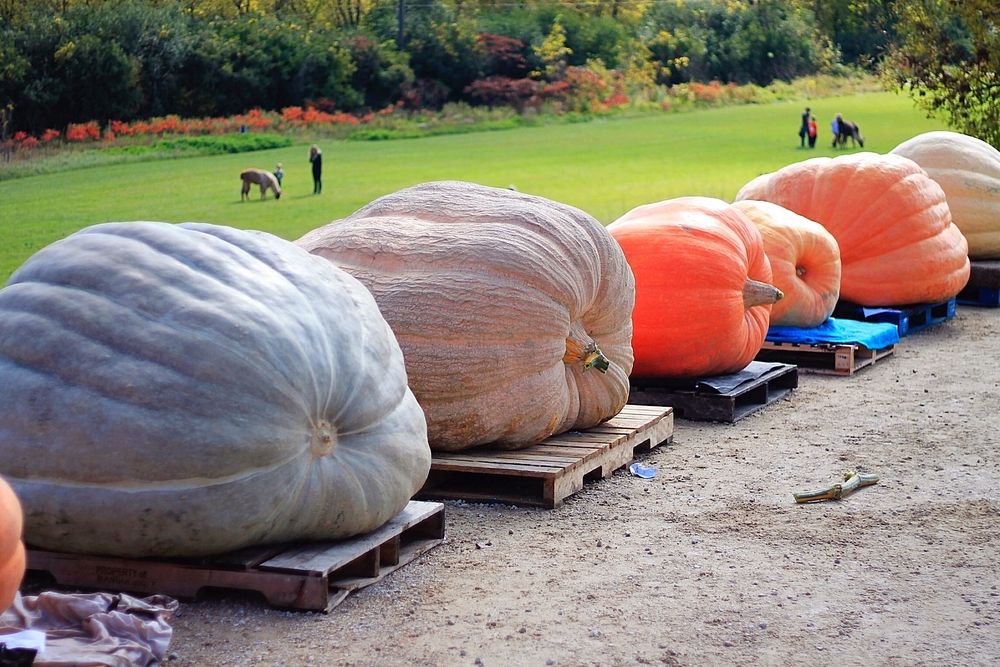 Growing Your Pumpkins
Growing giant pumpkins is serious business. After preparing the beds and planting the seeds, it’s still a long road ahead before the pumpkins attain a massive size. The checklist for what your pumpkins will need includes plenty of sunlight, warmth, and water. Fertilizer is also essential to avoid nutrient deficiencies, so be sure to give your plants light nutrient doses weekly. Some growers even add milk to the list as it contains calcium necessary for good growth.
As mentioned, pumpkins thrive in hot weather, but excessive temperatures can lead to wilting, flower drooping, and the pumpkin skins might crack. In that case, you’ll need to protect the fruits from higher temperatures (above 43 °C).
While pumpkins need copious amounts of water, make sure the soil is evenly moist instead of soggy. Keep the leaves dry to prevent fungal diseases. Watch out for weeds growing around your plants, as they can hinder the growth of your plants by stealing precious resources.
If you want your pumpkins to grow as big as possible, it’s best to limit the number of fruits growing on the vine via pruning. This will reduce competition for resources and give your healthiest pumpkins more free room to grow.
Additional things to Keep In Mind When Growing Large Pumpkins
They are taking care of the vines. Every leaf in a vine is more important than you realize because having large and larger leaves will support more growth. Vines put out roots at intervals, so make sure the vines are covered in soil to anchor the roots and maximize uptake of nutrients. However, it would help if you uprooted the vine near the pumpkin, so the pumpkin has enough room to grow.

You are harvesting your pumpkins. Of course, the most exciting part! Once your giant pumpkins have matured, carefully clip them from the stem and weigh them soon after before they start losing weight. Did you know that the larger the pumpkin, the more it resembles a pancake rather than a spherical or coach-shaped fruit?